You are currently browsing the monthly archive for August 2020.

I’ve recently spent some time thinking and learning about index theory; this led to my recent talk at the Universitetet i Bergen on heat kernel methods for proving index theorems. I’d like to continue this by creating a series of blog posts presenting an introduction to index theory accessible to young researchers in mathematics. This post will serve as an introduction to the topic and an indication of what topics I will write.

What is Index Theory?

For certain (pseudo)differential operators in appropriate settings, it turns out that these analytic indices can be computed from purely topological information. This is remarkable, since it implies that the existence and properties of such operators is strongly influenced by topological constraints in ways that are not otherwise at all obvious!

The study of index theory is broad, including classical results such as the Gauss-Bonnet Theorem (and its generalizations), which led to results in complex geometry (Riemann-Roch, Hirzebruch Signature, Rochlin), and more recently Atiyah-Singer. It also includes fixed point theorems such as those of Brouwer and Lefschetz. There are many varied proof methods of index theorems worth study in their own right; K-theory, cobordism theory, and heat kernel methods all play prominent roles.

Arguably the earliest index theorem is the Gauss-Bonnet Theorem (1848), which states that for a two dimensional Riemannian manifold \(\mathbb{M}\) (a surface), \[\chi(\mathbb{M}) = \frac{1}{2\pi}\int_\mathbb{M}K\ dA\] where \(\chi(M)\) denotes the Euler characteristic and \(K\) the Gaussian curvature of \(\mathbb{M}\). In this setting, the Euler characteristic was simply defined by \[\chi(\mathbb{M}) := V – E + F\] where \(V,E,\) and \(F\) are respectively the number of vertices, edges, and faces of a triangulation of \(\mathbb{M}\) . Notice, this is independent of the choice of triangulation! This can be seen by considering how the characteristic would change by modifying the triangulation: the basic ways to modify a triangulation are 1) to add an edge between two existing vertices (which also creates a face) or 2) to add a new vertex and connect it by an edge to an existing vertex. Both of these operations keep the characteristic constant.

The original proof follows from the local formula \[\sum_{i=1}^3 \theta_i = \pi + \int_T K\ dA\] relating the interior angle measures \(\theta_i\) of a triangle \(T\) embedded in a (curved) surface to the integral of the Gaussian curvature of the surface. Summing this result over a triangulation of a surface recovers the Gauss-Bonnet Theorem.

This was generalized to arbitrary dimensions (on Riemannian manifolds) by Chern (1945) as \[\chi(\mathbb{M}) = \frac{1}{(2\pi)^{n/2}} \int_\mathbb{M} \operatorname{Pf}(\Omega)\] where the Pfaffian \(\operatorname{Pf}\) is a polynomial in the entries of a matrix and \(\Omega\) is the curvature form associated to the manifold. Here the Euler characteristic has been generalized; it can be defined as the alternating sum of the number of p-dimensional elements of a CW-complex (a higher-dimensional generalization of triangulations), but it is equivalently defined by \[\chi(\mathbb{M}) = \sum_{p=0}^n (-1)^p \dim H^p_{dR}(\mathbb{M}) \] where \(H^p_{dR}(\mathbb{M})\) denotes p-th deRham cohomology group.

To understand the importance of this theorem it is key to note that the Euler characteristic \(\chi(\mathbb{M})\) is a global, topological property of a manifold, while the curvature form \(\Omega\) is associated to the Riemannian structure (and thus is contains much more than topological information) and moreover is a local object. The Chern-Gauss-Bonnet Theorem can be interpreted to assert that by integrating a local, analytic object over the manifold one can recover a purely topological property. This, if nothing else, has strong ramifications for the possible curvatures (and therefore Riemannian structures) that can exist on a manifold. For example, it is an almost immediate corollary that a manifold admits a flat metric if and only if its Euler characteristic is 0.

The Riemann-Roch Index Theorem (1850, Riemann, 1865 Riemann-Roch) gives a similar notion on Riemann surfaces; that is smooth manifolds locally homeomorphic to \(\mathbb{C}\) with holomorphic transition maps. On a Riemann surface we define the set of divisors to be the free abelian group of points on the surface. Associated to a mereomorphic function \(f\) there is a divisor
\[(f) = \sum_{z \in R(f)} s_z z\]
where \(R(f)\) is the set of zeros and poles of \(f\) and \(s_z\) is the degree of \(z\) (setting \(s_z\) positive for zeros and negative for poles).

Extending this notion to the space of differential forms in the obvious way, a divisor is called principal if it is generated by a function (as above); it can be shown that the set of divisors of globally mereomorphic 1-forms are equivalent up to a principal divisor, and thus we call this equivalence class the canonical divisor \(K\).

Associated to a divisor \(D\) are two quantities of interest:

The Riemann-Roch theorem was generalized by Hirzebruch in 1954 to spaces of higher dimension by considering the indices \(l(K-D),l(D)\) as the dimensions of sheaf cohomology groups. Later (1957) Grothendieck went further, interpreting the Riemann-Roch theorem as a statement about a morphism between varieties which spurred the now famous Atiyah-Singer Index Theorem.

This fairly dense statement is actually a generalization of both the earlier index theorems; the left-hand side \(\dim\ker D^+ – \dim\ker D^-\) is known as the analytic index of D and the right-hand side \(\int_\mathbb{M} \hat{A}(T\mathbb{M}) \wedge \operatorname{ch}(\xi)\) is referred to as the topological index.

Applying this theorem to the operator \(D = d + \delta\) acting on the space of differential forms \(\Lambda^*\mathbb{M}\) (splitting by even/odd degree) will recover the Chern-Gauss-Bonnet Theorem, by recognizing \(\chi(\mathbb{M})\) as the topological index and \(\frac{1}{(2\pi)^{n/2}}\int_\mathbb{M} \operatorname{Pf}(\Omega)\) as the analytic index.

Similarly, by letting \(D = \bar\partial + \bar\partial^*\) on the bundle of differential forms of type \((0,i)\) over a complex manifold (splitting as \(i\) even/odd) we recover the Hirzebruch-Riemann-Roch theorem.

I am interested in so-called “heat kernel” methods of proof for index theorems; I intend to give a series of posts that explore some index theorems in more depth and give some indication of these methods. 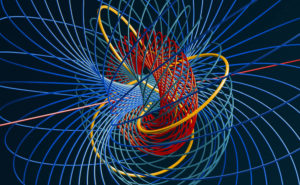